CyDelete8 is one of the most useful tweaks for Cydia. This hack allows users to delete apps downloaded from Cydia directly from the homescreen. Normally, unlike the App Store apps you have to open Cydia and uninstall the applications downloaded from the store. But with CyDelete8 you can do it directly from SpringBoard by entering the wiggle mode and tapping the ‘x’ button.

This just came in. CyDelete has been updated to work with iOS 8 (it’s now called CyDelete8). It’s one of the coolest tweaks to have if you keep adding/deleting tweaks (that show up on the Springboard).

CyDelete8 lets you quickly delete Cydia tweaks like Winterboard, iFile, Springtomize right on the Springboard just like how you delete apps. If you don’t have this tweak, you’ll have to get into Cydia every time you want to delete a tweak. 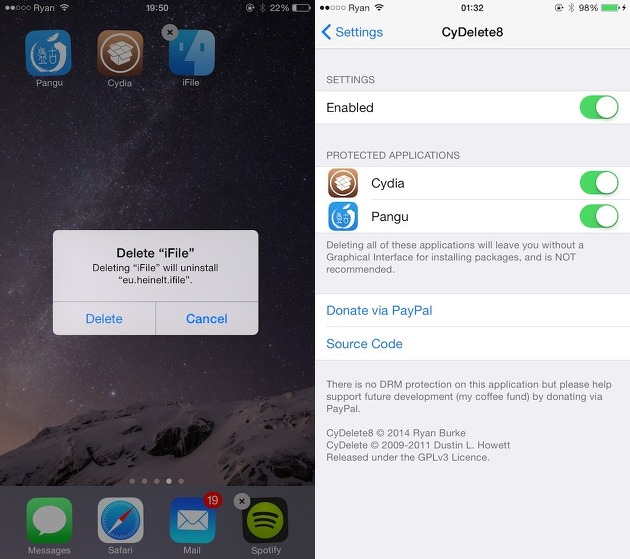 However, you will still not be able to uninstall the tweak like how you unintsall apps. Tapping and holding app icons (causing them to wiggle) and then tapping on the ‘x’ on the app icons works for normal apps but not for the Cydia tweaks. That’s why we need CyDelete8.

Deleting Cydia Tweaks with CyDelete8:
(Note that you can only delete Cydia tweaks that have an app icon on the Springboard)

Depending on the tweak, you will have to respring. Occasionally, your iPhone might respring automatically but if that doesn’t happen, it’s best to manually respring your device to make sure the changes are affected.

CyDelete8 adds a new functionality to prevent users from accidentally deleting Cydia and Pangu. In Settings -> CyDelete8, you have two switches for Cydia and Pangu under Protected Applications. Enabling this will prevent the ‘x’ icon from showing up on Cydia/Pangu.

CyDelete8 is up on BigBoss and it’s available for free.

Let us know what you think about this tweak in the comments below !

What To Expect From Apple’s Event